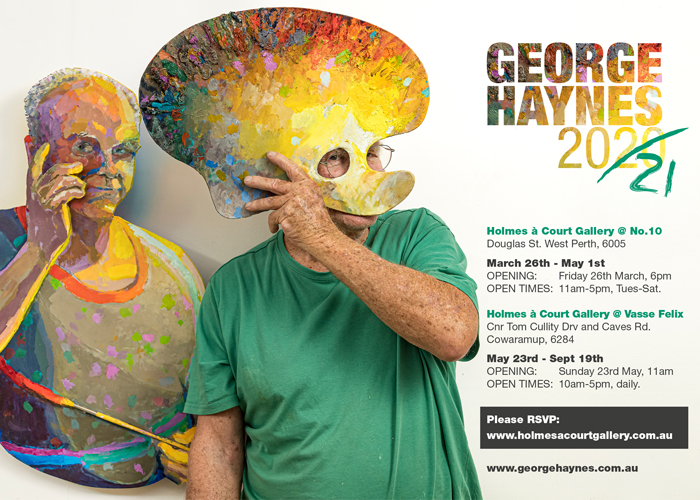 ANOTHER LESSON FROM HAYNES

Among George’s large quiver of quotable aphorisms is the critical perspective “he (some artist) may be hitting bull’s eyes, but he’s not standing back from the dartboard”.

Haynes, in a move possibly surprising to some, has in the current work stepped further back from the dartboard than we’ve seen in some time… but is spearing as many bulls as ever, probably more. The degree of difficulty in these works won’t be apparent to all, but if you’ve spent any time in that particular bull ring, hoping you’re waving the right coloured cape, you’ll know how much so this is the case.

Ask Vermeer how hard it is to set up the intervals when light and shade cross a richly coloured brocade curtain. Visit The Art of Painting (The Artist in His Studio) Ca. 1665.  This is an exercise the complexity of which has its counterpart right across this show, when a postulated shaft of light, illuminates a postulated, already complex, “existing” two-dimensional picture of a three dimensional space. Additionally complex, inasmuch as Haynes is not merely faithfully recording, but on the basis of a profound understanding of exactly how light does illuminate… positing these phenomena in imagined scenarios… when not writing abstract sonnets on that multi dimensional chromatic keyboard. The variables that provide the dimensions to this instrument are too numerous to mention but start with tone, temperature, saturation, hue, depth of field, reflection, refraction, transmission, mark size/angle, opacity, edge quality, weight, taper and 42 more. I mention them merely as a reminder of what is actually involved in virtuosity.

I think JS Bach would be impressed.  Fashion a cloth from a fully saturated hue. Bring on the counterpoint. Thread it with waves of programmatic chromatic modulations, key changes, changes of register and syncopating stripes. The whole time keep an overall intended flavour/character/gender in mind. Take this fabric and expose it to an imagined light that has been shaped by an imagined portal. Or… pleat that invented topography and go figure what happens next to the incoming light rays, if it is 5pm and there is a sea breeze. Then reverse back over every pixel and tweak where necessary so that the whole doesn’t just sit… but sings. The Haynes hills too, are clad with such awesome considerations. You can almost watch in real time as they crystallise into orchestrations.

Where the game is at its most complex - and rewards really sustained viewing (for me anyway) - is not in the lyrical picturing but in the freer purely instrumental aspects, in what might have been once thought of as the abstract elements.

Meanwhile George’s flamethrower is cremating what’s left of the former distinction between the abstract and the objective (or whatever you prefer to have as its antagonist). I can see the light from the fire now, illuminating a brocade curtain. I see George squinting, musing, nutting it out, proposing a fresh game and inventing in front of nature.

THIS LAST EXHIBITION WAS SOLD OUT

THIS LAST EXHIBITION WAS SOLD OUT WITHIN AN HOUR OF OPENING.

Would the person who spoke to George on the phone, last week, about purchasing COMMONDALE, please contact us by email? 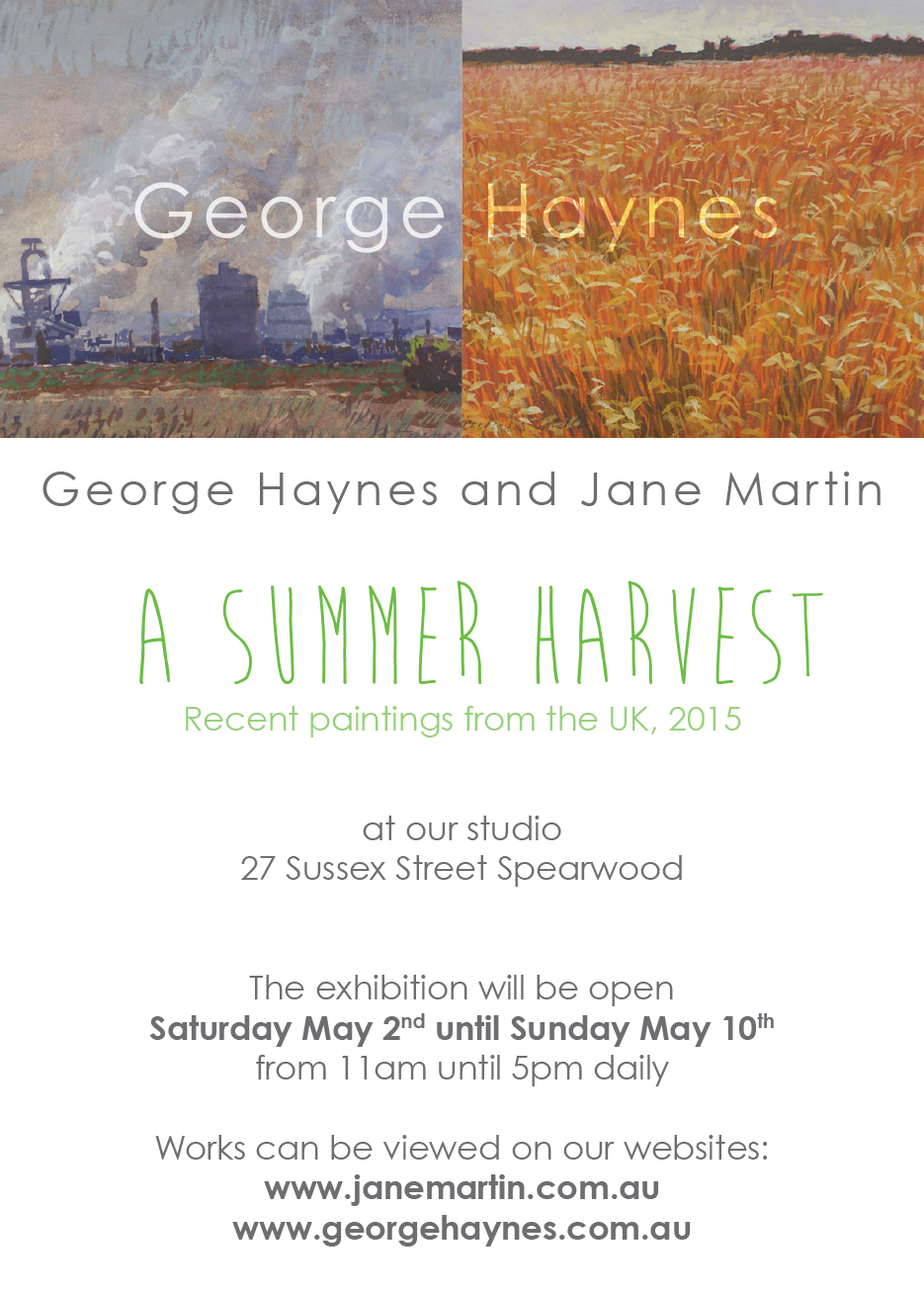 RECENT PAINTINGS FROM A SUMMER IN EUROPE - 2015 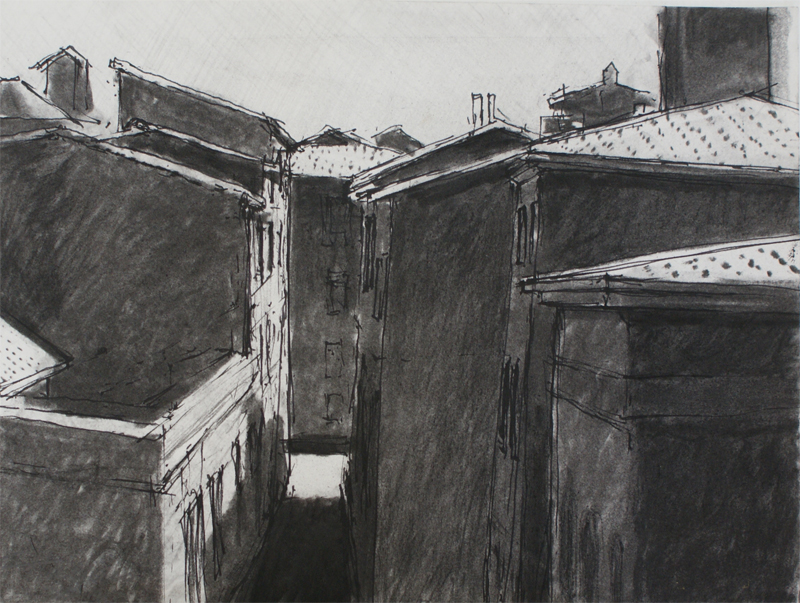 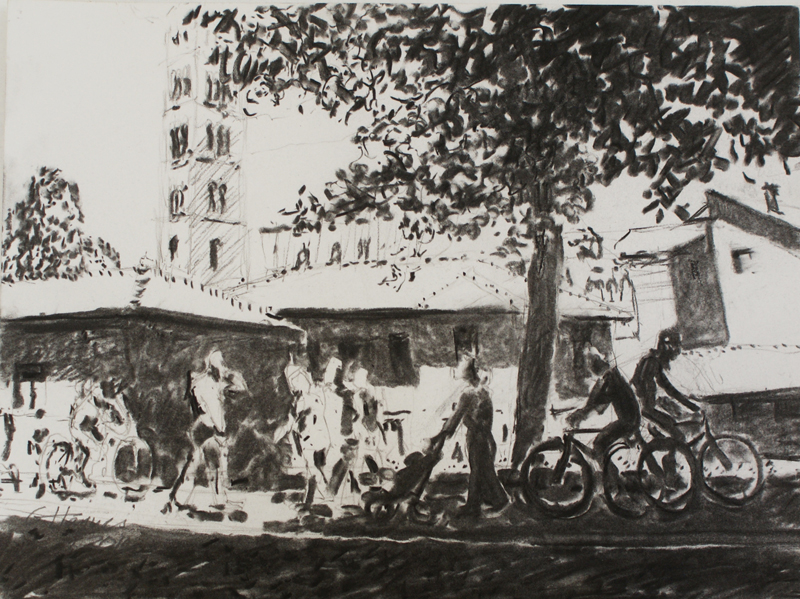 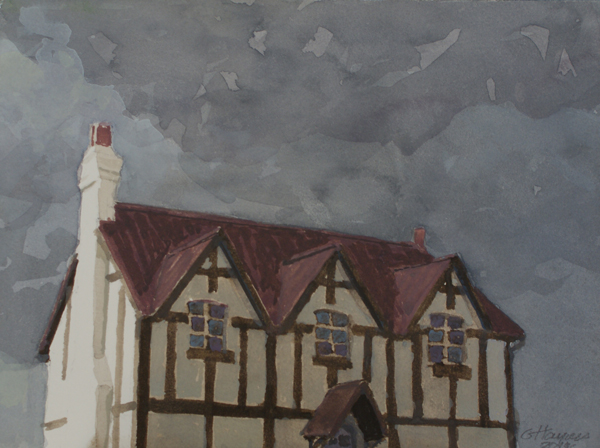 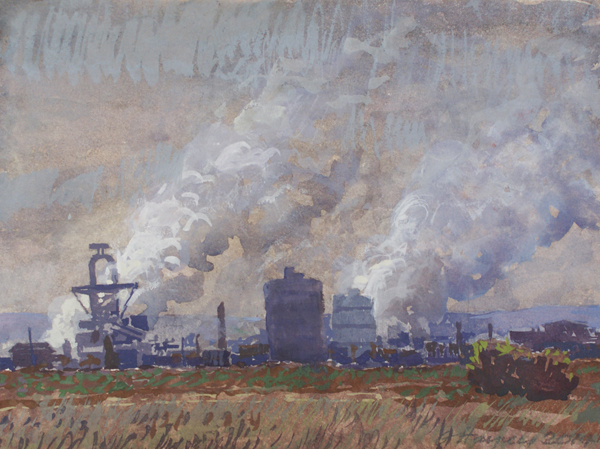 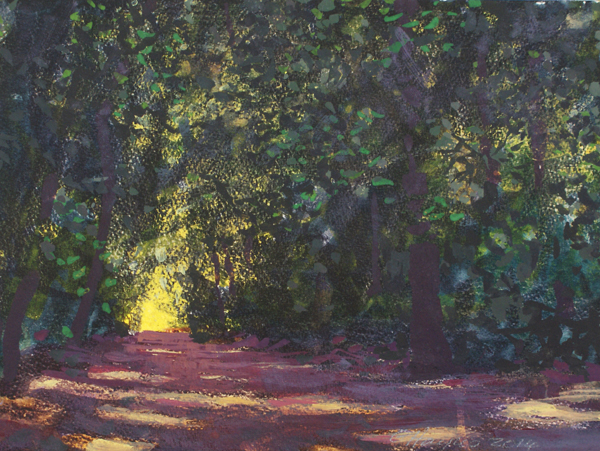 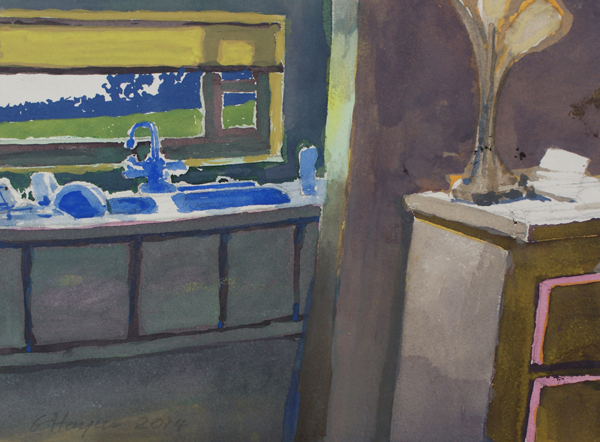 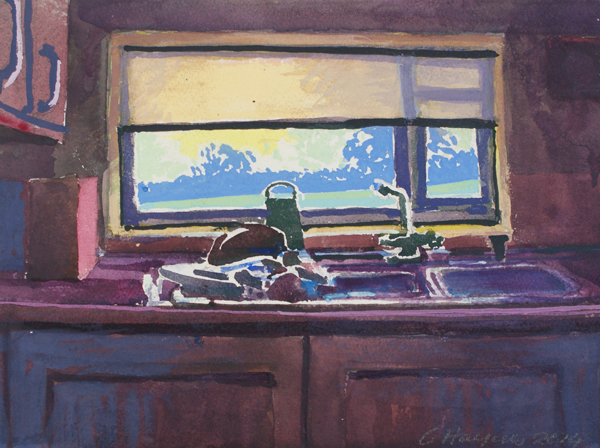 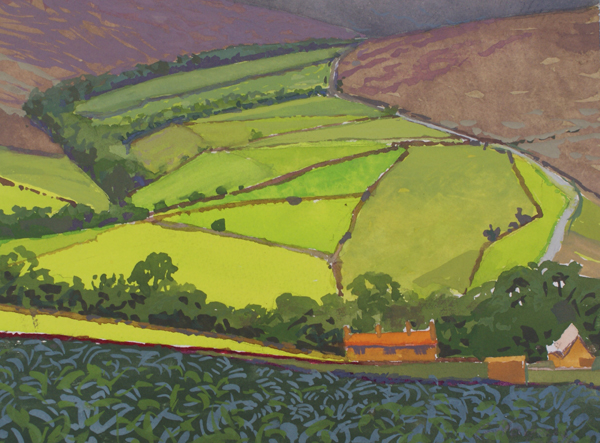 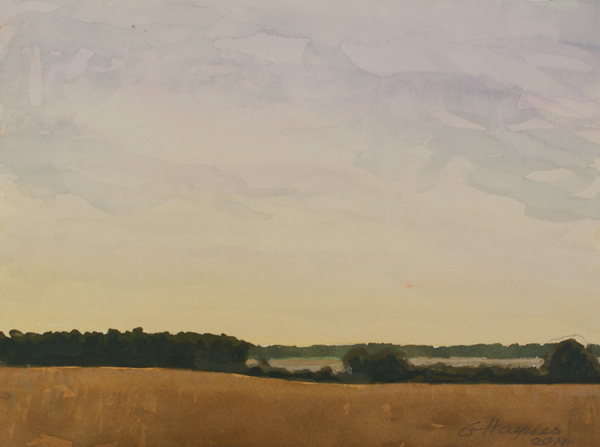 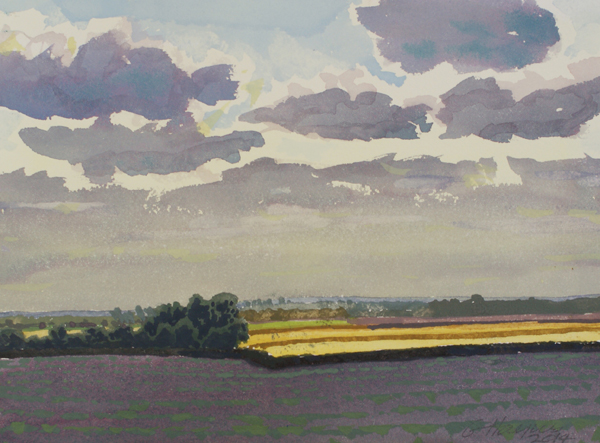 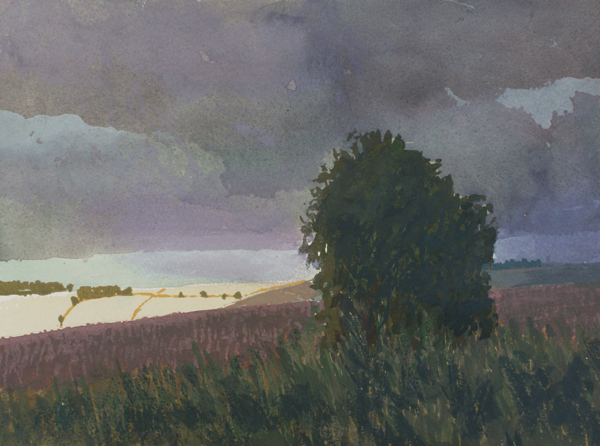 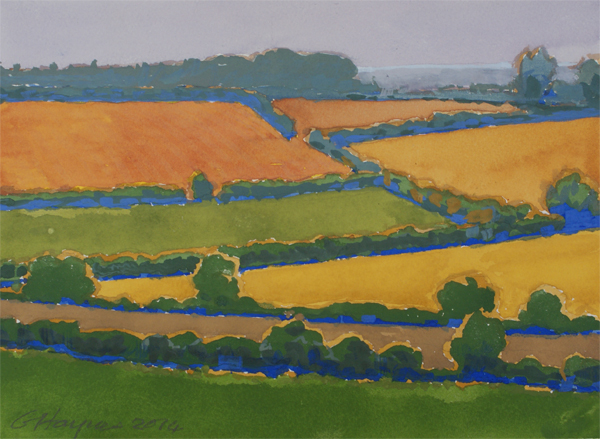 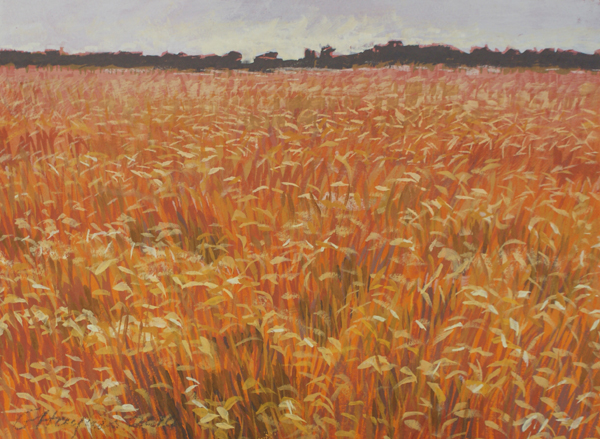 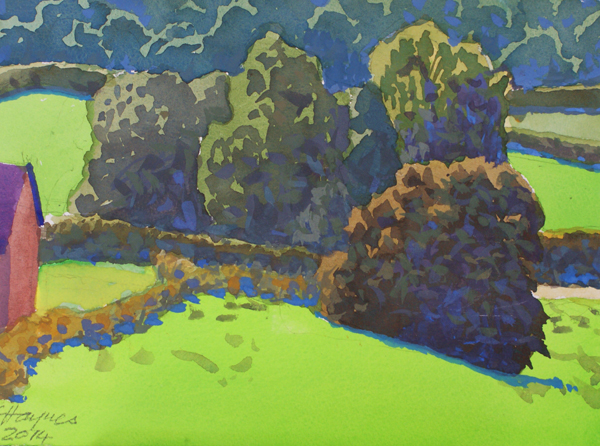 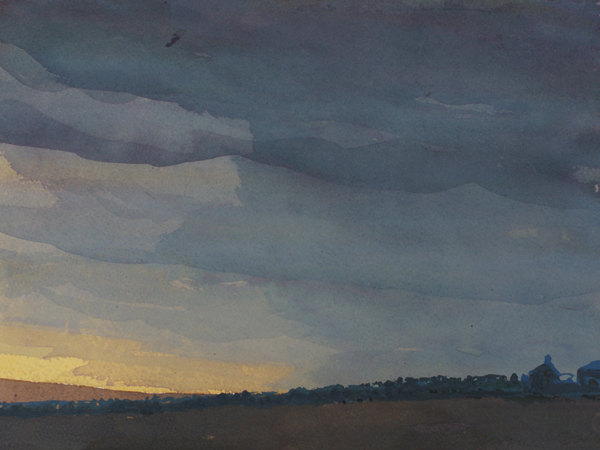 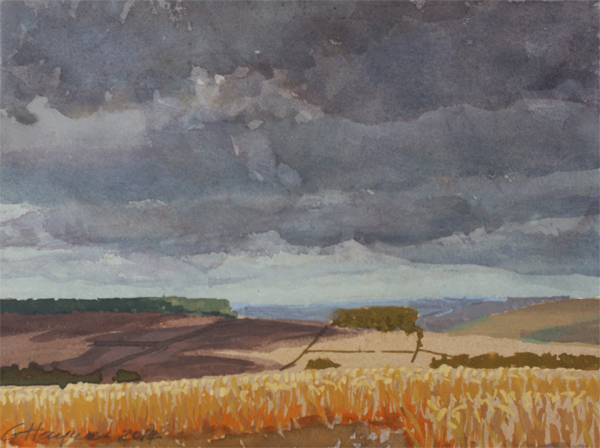 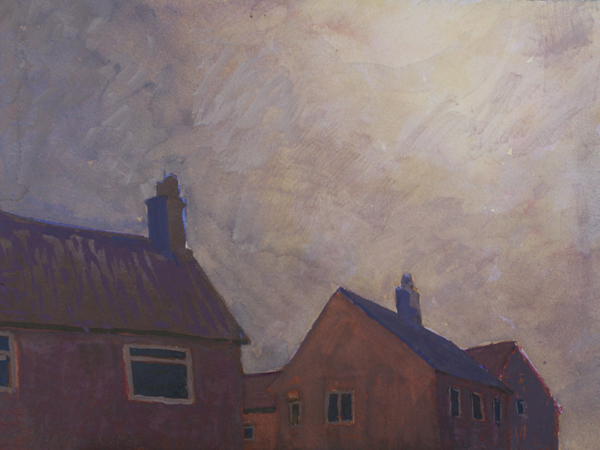 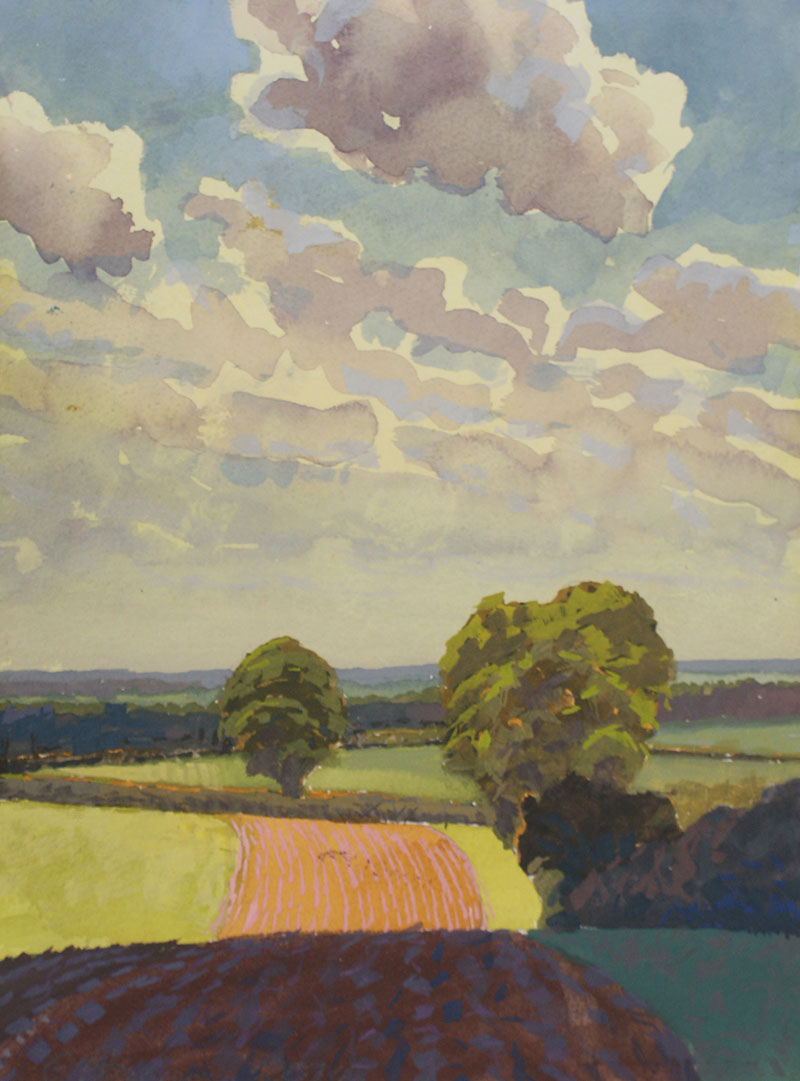 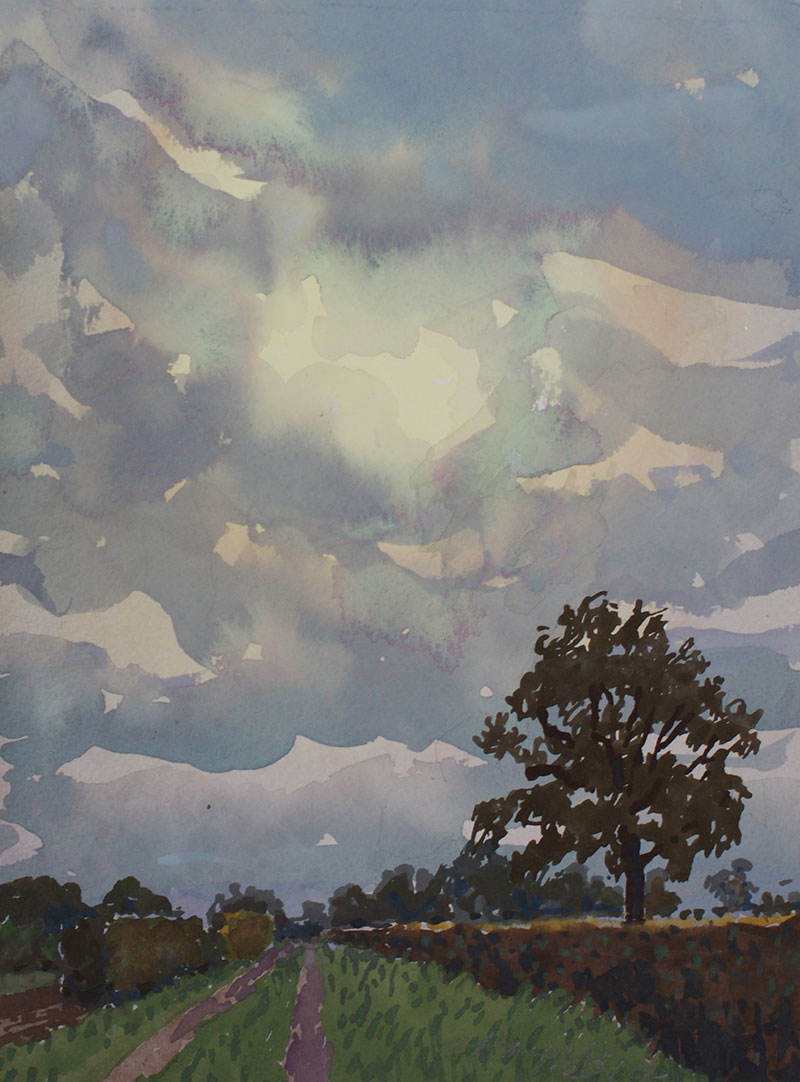 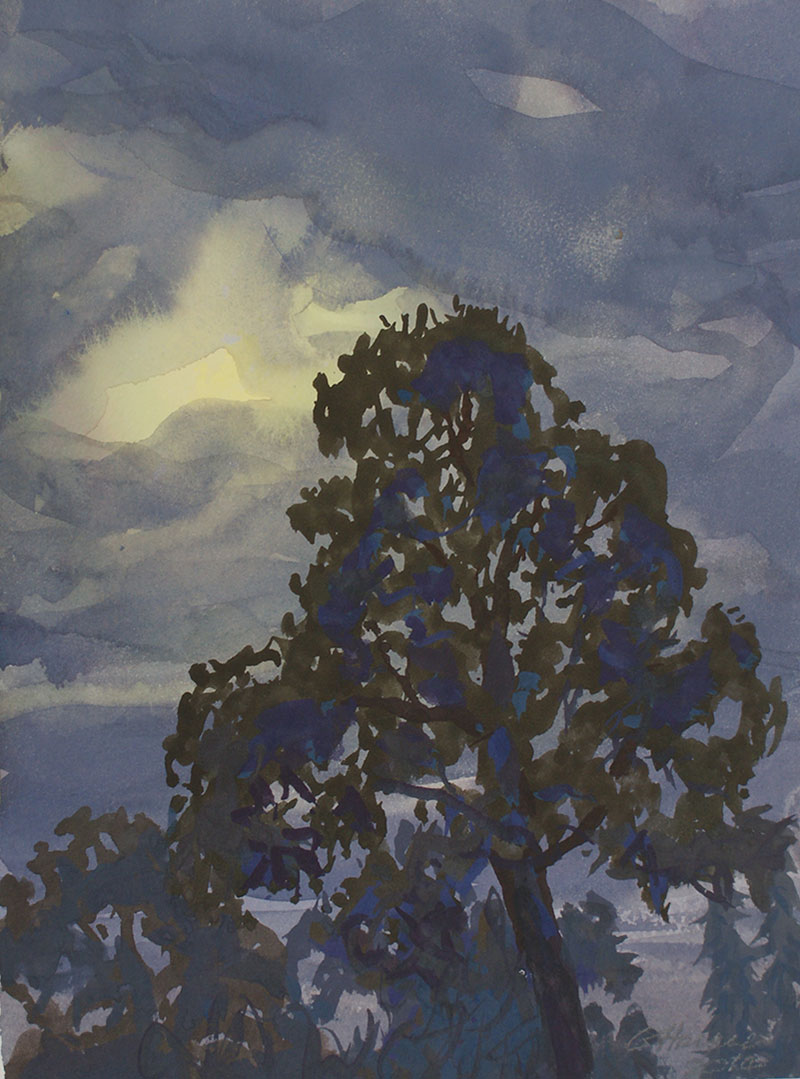 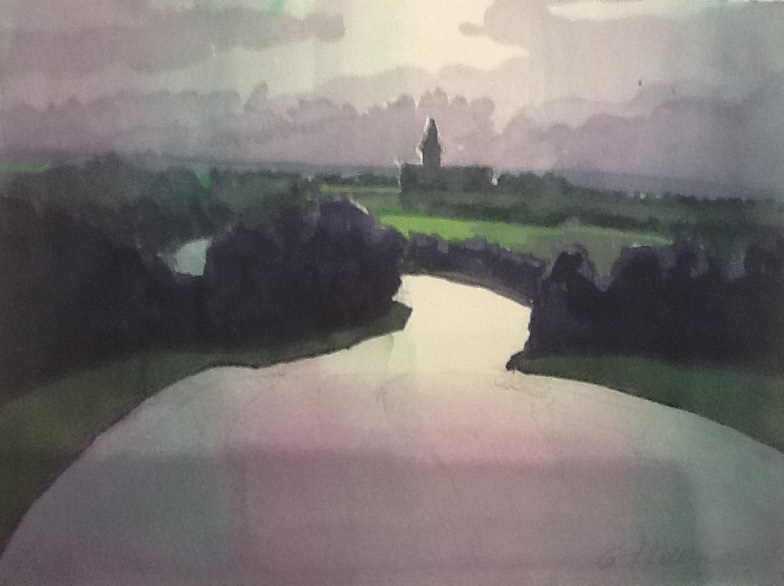 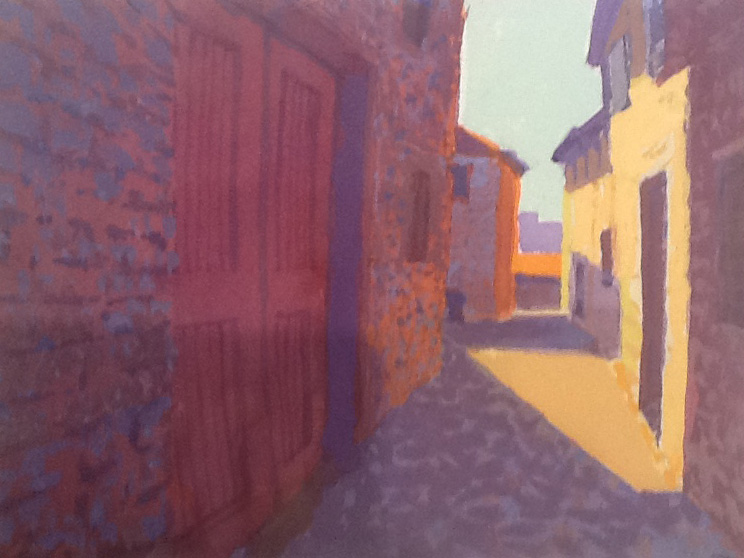 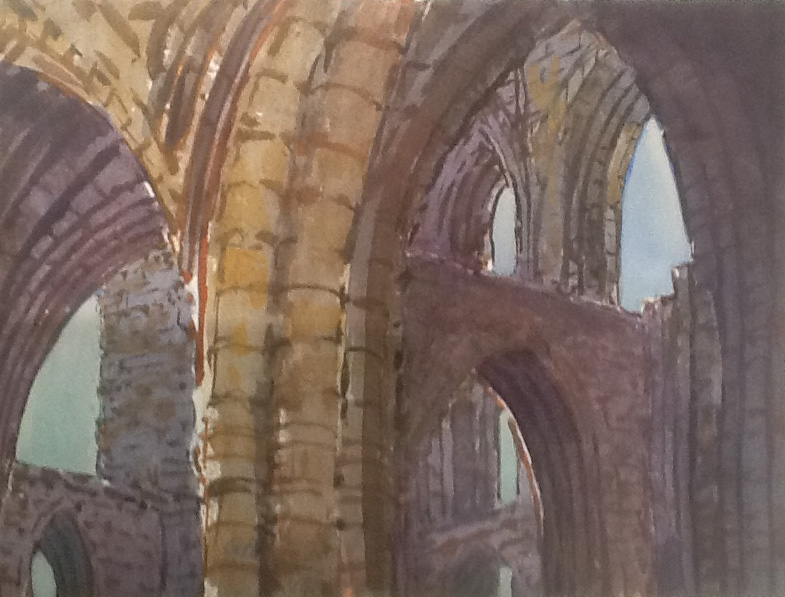 A new show in May

A Show Of Small Paintings Through The Seasons – Summer/Autumn 2013

I began this body of work in January – I wanted to take an intense painting course with nature as my tutor.  I started by doing small (5” x 7”) paintings from the back of the van – I must avoid the sun.

I did 17 paintings around Cockburn/Fremantle, and then to Avoid The Heat we went south to Albany/Denmark where I did 13 more. So at the time of writing this (end of February) I am averaging 15 paintings a month, so hopefully by the Second Sunday in May there should be a few more, and I will show them then.

Jane will have her own show on the Second Sunday in October, and we look forward to seeing you on both occasions.

To go landscape painting is to undergo one’s education in public, with all its humiliations and enlightenments. (Educational in that all my painting is informed by what I have learnt landscape painting.) To sit ‘en plein air’ is to be open to the vagaries of the weather, the changes in the course of the day. It’s a bit like fishing, you do not know what you are going to get. It could be something good or one can return home empty handed.

It is this unpredictability that makes it so enthralling. Sitting in the landscape reflecting on what one sees – for instance, on our last expedition down south to Albany and Denmark, I experienced the all-pervasive effect of the wind. Have you noticed in the Porongorups and Stirlings, how the slopes on the windward side are mainly made up of positive convex shapes, and those to leeward, concave – rather like a wave – not water, but waves of granite (Porongorups), or sandstone (Stirlings).

I admire the grit of those little peppie trees, forcing their crooked little branches out into the wind, keeping their crowns low and flat.  That West Australian southerly, how it dominates, but I digress. Let’s get back to landscape painting.

When sitting there, contemplating the landscape, I feel obliged to try and capture what I see (with the exception of one or two compositional adjustments) – to capture the essence of the landscape on that particular day, to paint it as I feel it is.

Do you know the legend of the circus worker who receives the call and goes and joins a monastery. He is not a very good monk, and sneaks off on his own every day to some rendezvous.  The Abbot, curious, follows him and finds him juggling in front of a statue of the Virgin. He is about to clap his hand on our hero’s sacriligious shoulder when the Virgin’s statue raises her hand, and stops him.

If juggling is the only way our monk can pray, then landscape painting is that for me.

It is a deep-seated desire to give thanks for one’s existence, and the existence of all that surrounds us.

The miracle of the world and the sun and the moon that have shaped all I see and feel – what a blessing it is.

When the world was a thundering steaming Harley ‘Fat-Boy’ bikie’s jock strap, a swirling testosterone of noxious gases, the moon ejects from the Gulf of Mexico, like Adam’s rib, orbits the world and causes tides – creating change, a change that allows stromatolites to form and excrete oxygen, and in a very feminine way, subverts the chaos, and makes it fruitful, and so we are on the path to where we are now, standing in the landscape, juggling with the balls of colour, tone, temperature, and that greasy spinner, composition, in the landscape, painting it, and that is a miracle.